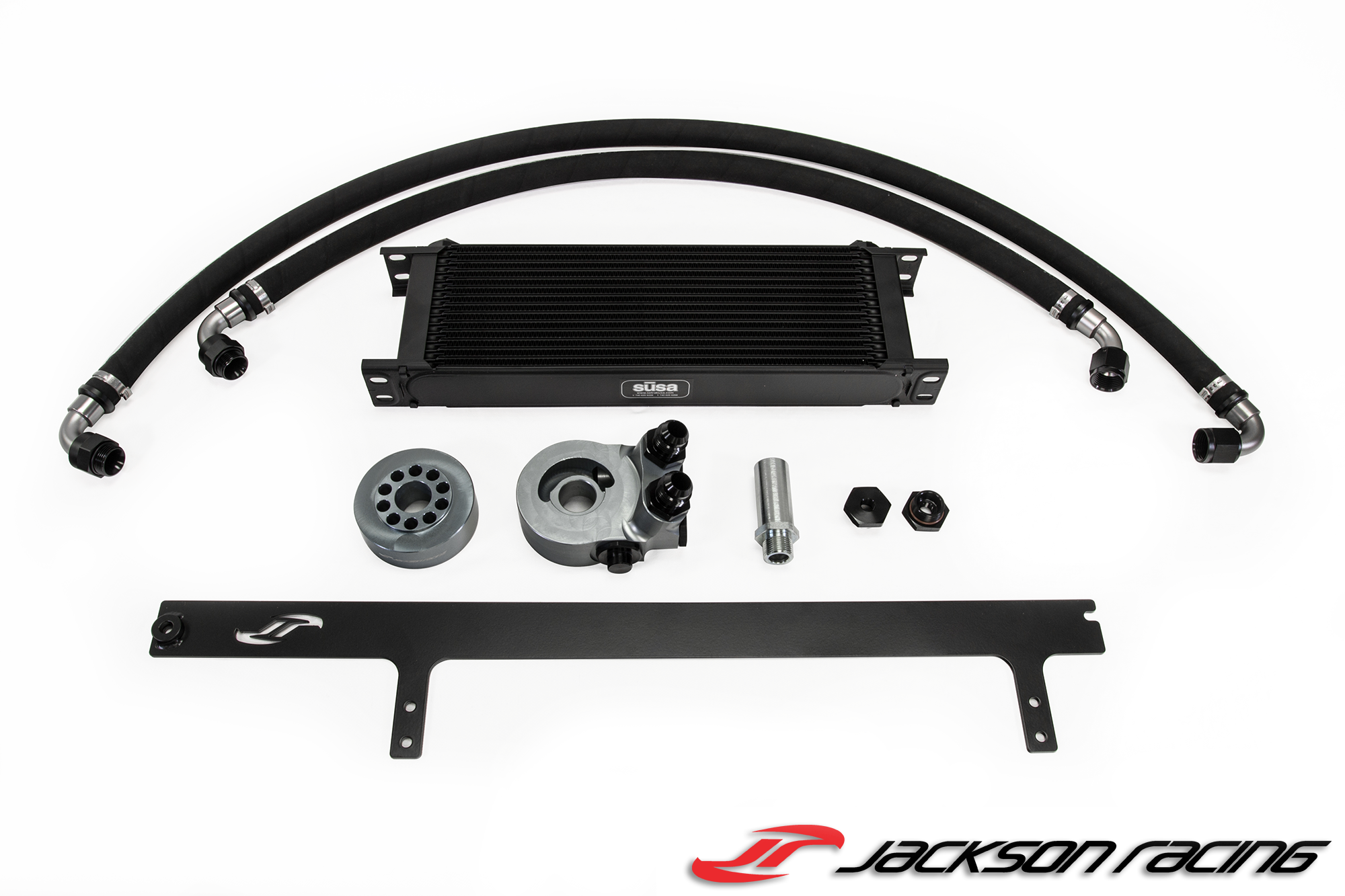 Chino, California (March 30th, 2018) – The championship-winning performance experts at Jackson Racing are proud to announce further updates to their popular line of cooling products, now including the Track Engine Oil Cooler Kit for the 86/BRZ platform. With added features, this kit is now $695USD.

An engine oil cooler is a must have for any track or hot climate vehicle. The FA20 engine in the FR-S/86/BRZ is a finely tuned high compression engine and engine oil temperatures can spike to dangerous levels even on stock cars.

The Jackson Racing Track Engine Oil Cooler Kit was developed in-house and designed to bring optimal oil cooling to the FA20 engine in the most extreme conditions. With multiple race wins and championships, Jackson Racing is excited to add more features to the popular 86/BRZ cooling product.
The most notable update to the Track Engine Oil Cooler Kit is the new Jackson Racing Oil Cooler Adapter, a proprietary JR design giving customers more adjustability. The new JR Oil Cooler Adapter features improved socket relief for filter screw installation and a new O-ring design to improve surface seal. With four M22 oil ports, the oil cooler lines now run to the top on the 86/BRZ application giving clearance for the 2017+ square air box. For those looking to have an additional sensor port for datalogging, 1/8” NPT M22 sensor port plugs are available as an option. The JR Oil Cooler Adapter for the Track Kits also features a built-in thermostat for proper engine oil warm up when cold. The Jackson Racing Oil Cooler Adapter is completed in new titanium grey anodized finish.

The included Setrab 9-Series oil cooler core was carefully chosen and tested to match the demands of the dedicated track/race enthusiast, and is unique to all other systems on the market. With a properly sized core providing improved cooling capacity, the Setrab 9-Series is the right cooler for the job. The Jackson Racing Track Engine Oil Cooler Kit has been put to the test by our own championship-winning racing drivers on the street and track, in the worst on track conditions. We are proud to say this system works flawlessly, keeping oil temperatures below 240ºF on track, thus maintaining engine performance throughout on-track sessions. 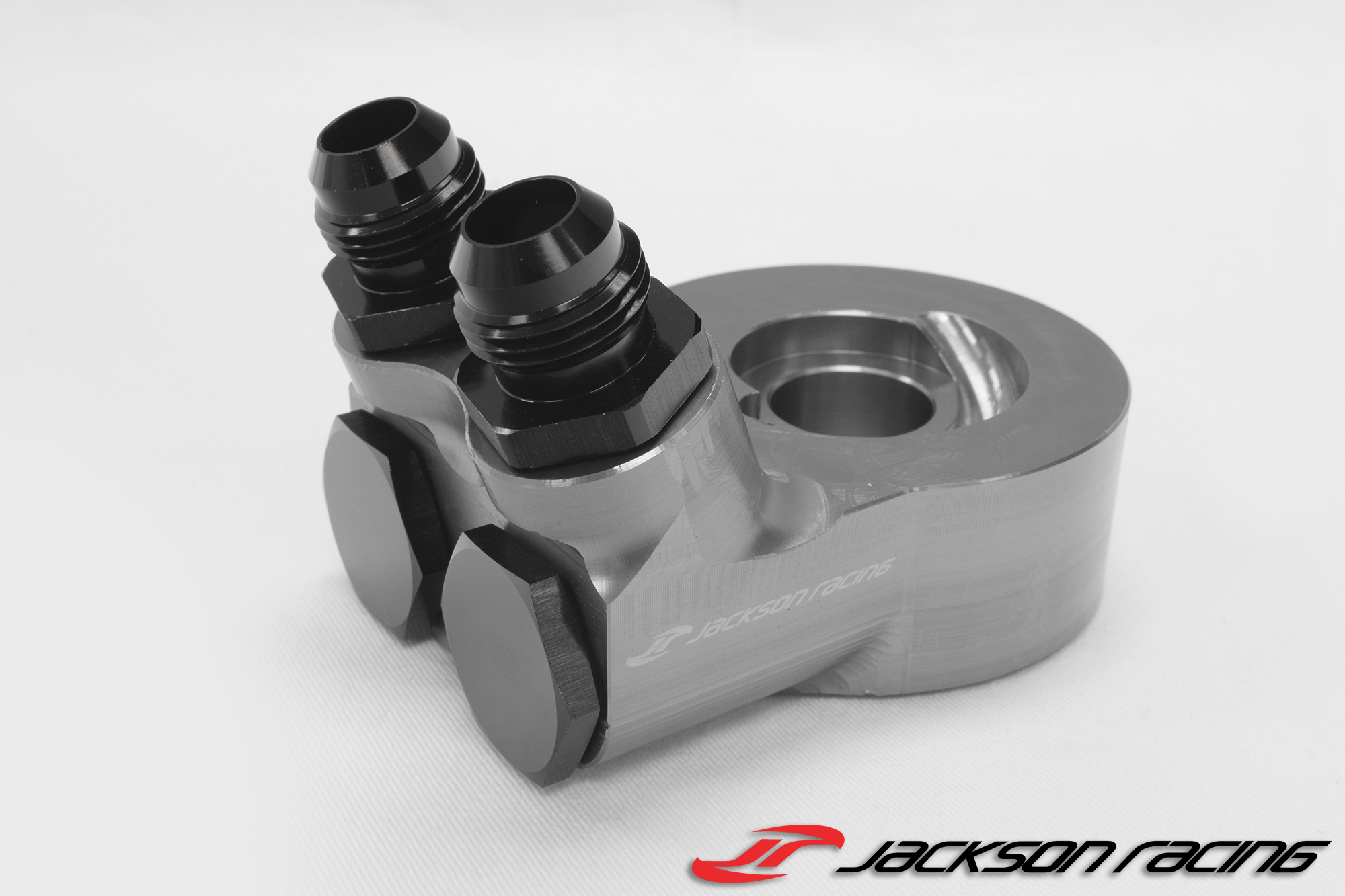 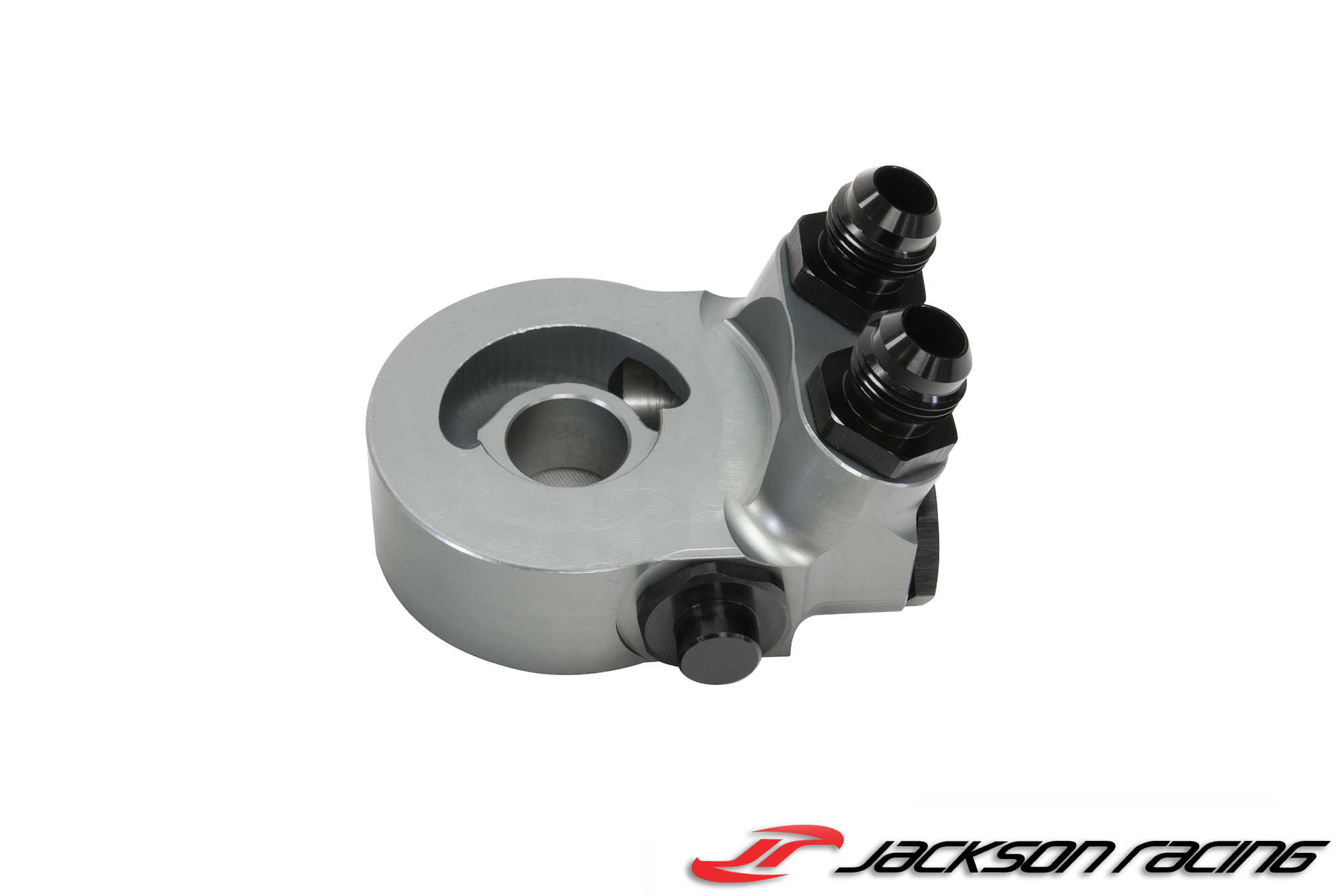 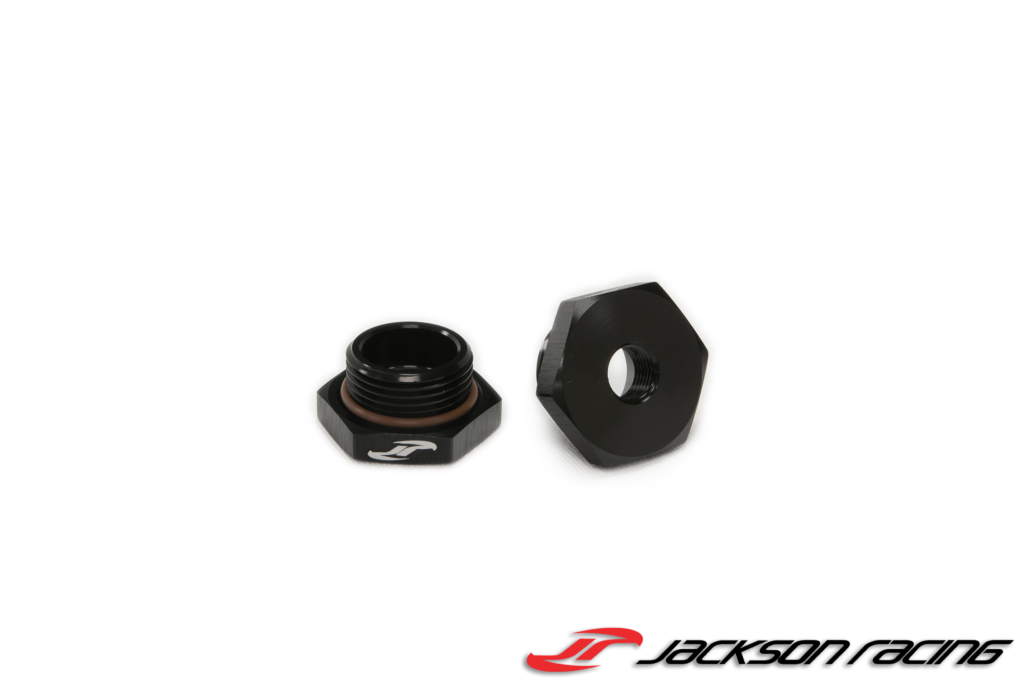 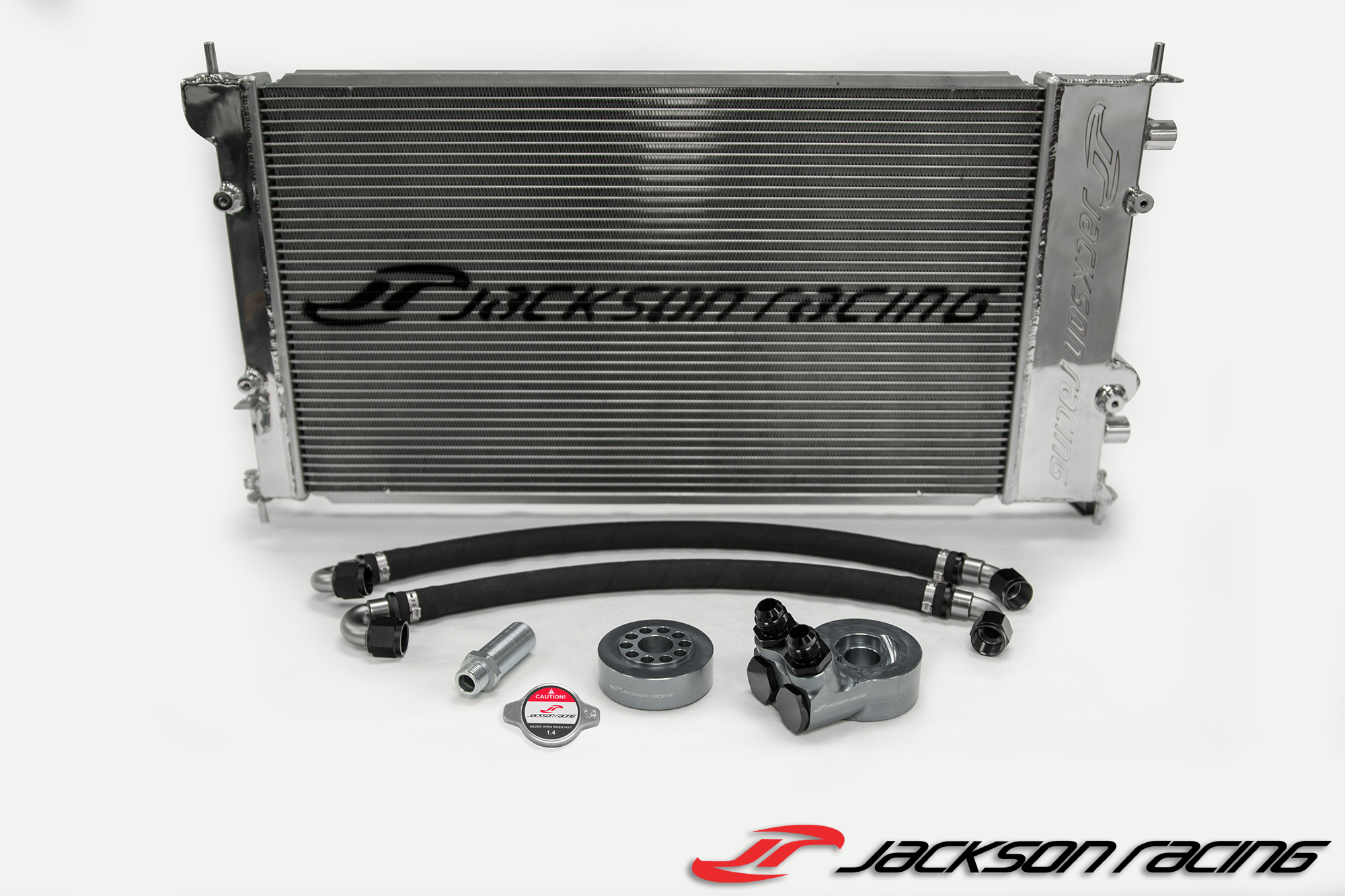 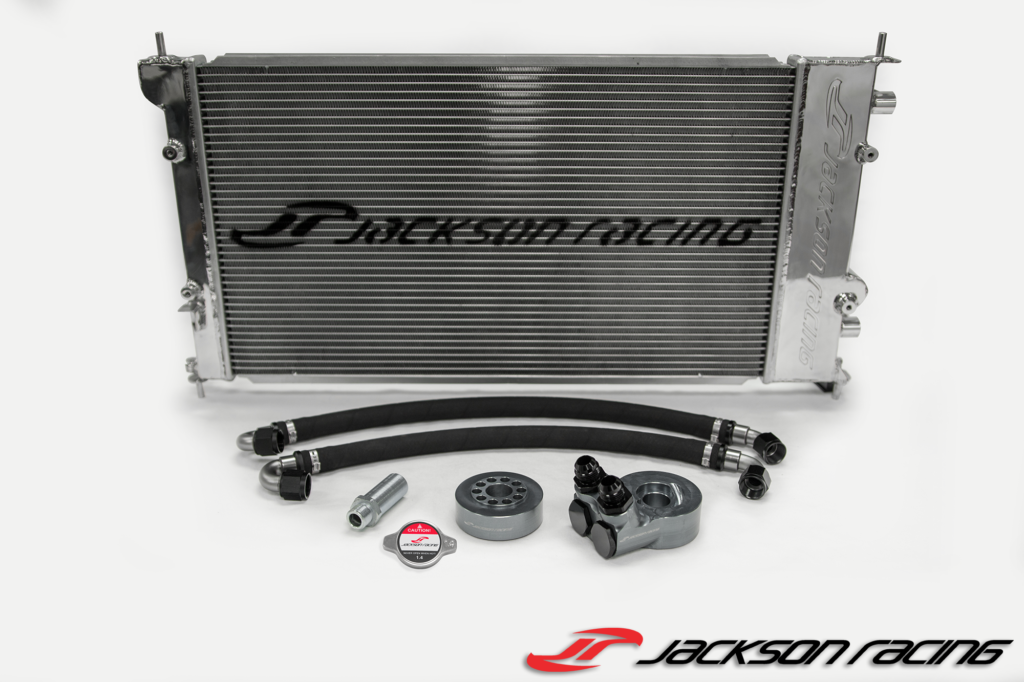 Chino, California (March 5, 2018) – The championship-winning performance experts at Jackson Racing are proud to announce updates to their popular line of cooling products, starting with the release of the Dual Radiator/Oil Cooler for the 86/BRZ platform. With added features, this kit remains at $895.00USD.

An engine oil cooler is a must have for high performance vehicles. The FA20 engine in the 86/BRZ is a finely tuned high compression engine and engine oil temperatures can spike to dangerous levels even on stock cars. The Jackson Racing Dual Radiator/Oil Cooler was developed in-house in conjunction with manufacturing partner CSF Radiators to be the ultimate solution for 86/BRZ Street and Track enthusiasts. With well over a year of development and now multiple national championships, Jackson Racing is excited to add more features to the popular 86/BRZ cooling product.

The Jackson Racing Dual Radiator/Oil Cooler is a true “drop in” all-aluminum radiator with built in oil cooler for the 86/BRZ platform. No trimming or cutting needed and installs with all OEM components. The Jackson Racing Dual Radiator/Oil Cooler includes all necessary components for engine oil connections for a true plug and play solution.
The radiator features a 31mm CSF B-Tube core, with over a 100% increase in cooling surface area. The CSF B-Tube technology boosts surface area vs standard oval tube cores by 15%. The integrated liquid to oil cooler features -10AN fittings in and out for proper flow to and from the engine.

The entire system has been put to the test on the street and track, including back-to-back SCCA National Championships with our Jackson Racing Touring 4 FR-S. We are proud to say this system works flawlessly, keeping oil temperatures within a 30ºF temperature delta, thus maintaining consistent engine performance. Thanks to the large liquid to oil cooler, engine oil is kept at the proper operating temperatures in all environments, whether it is cold startup or a hot day at the track.

FAQ
Q: Do I need to add more engine oil with the oil cooler kit?

A: Yes, an additional 0.5 quart of engine oil is required when installing the Jackson Racing Dual Radiator/Oil Cooler. 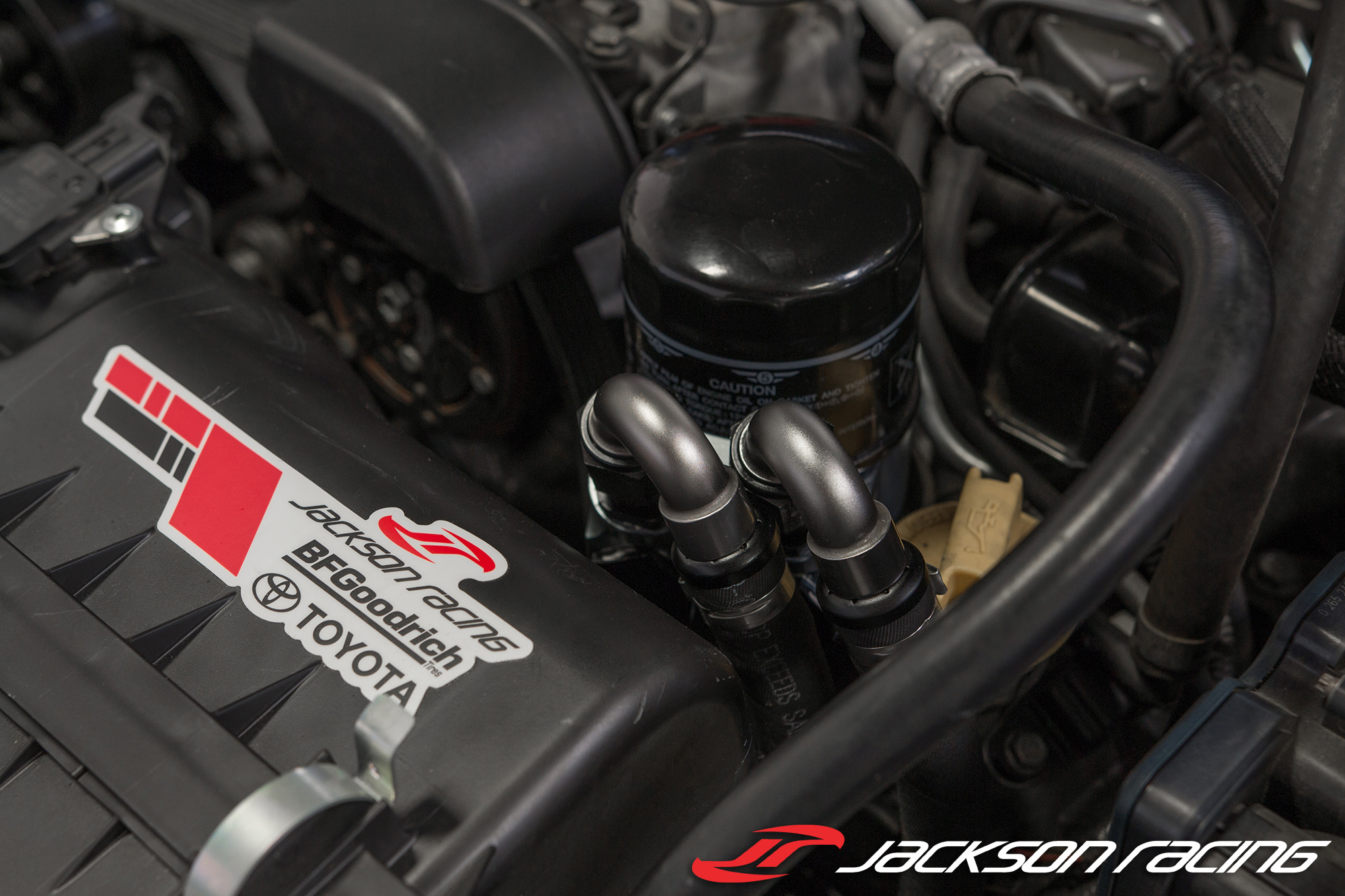 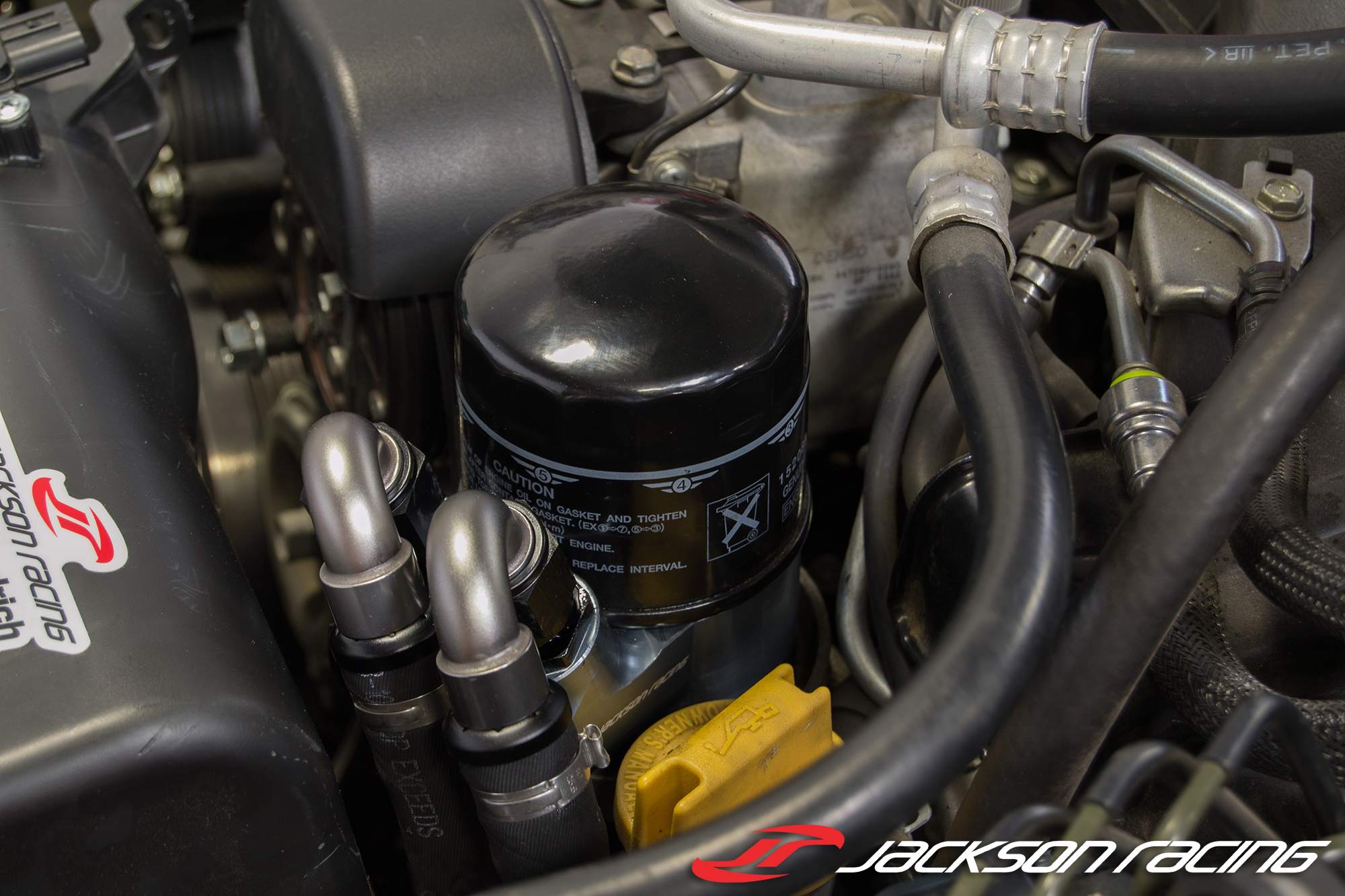 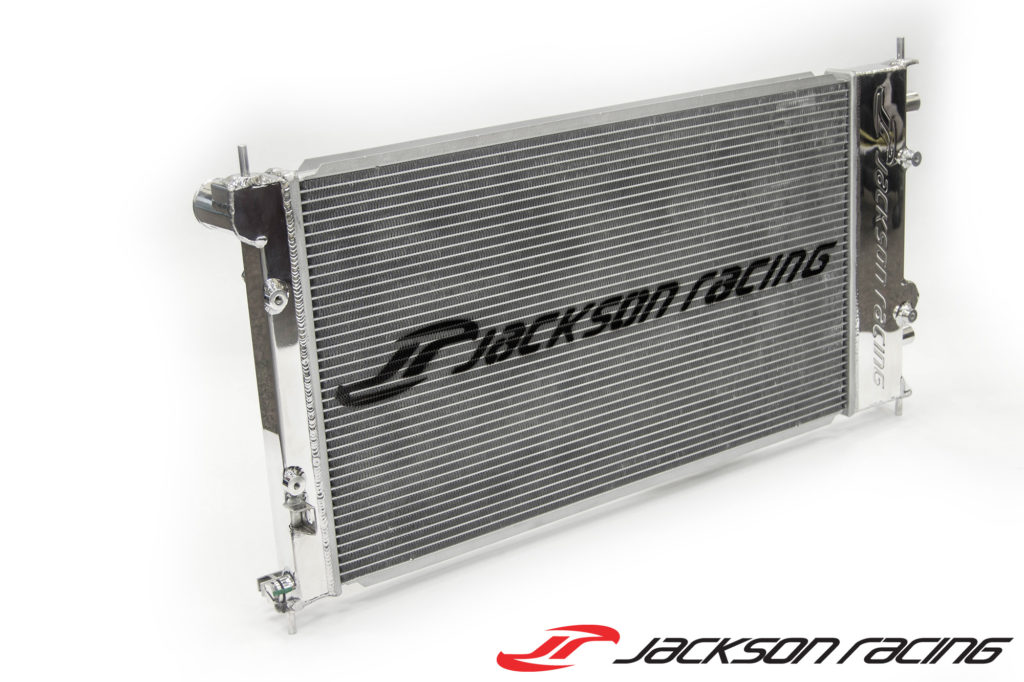 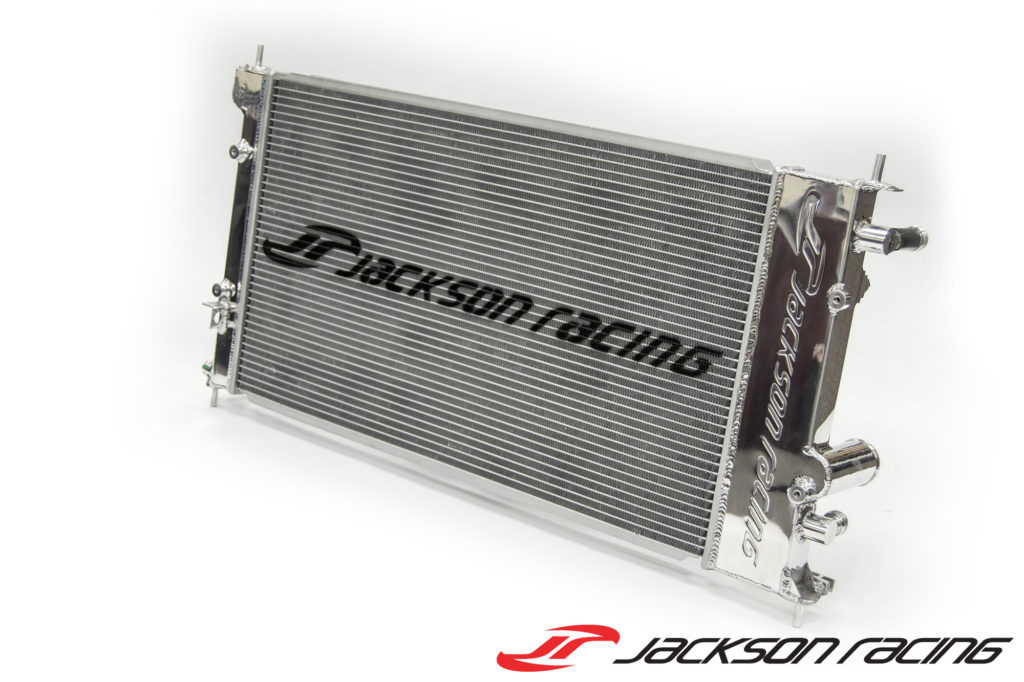 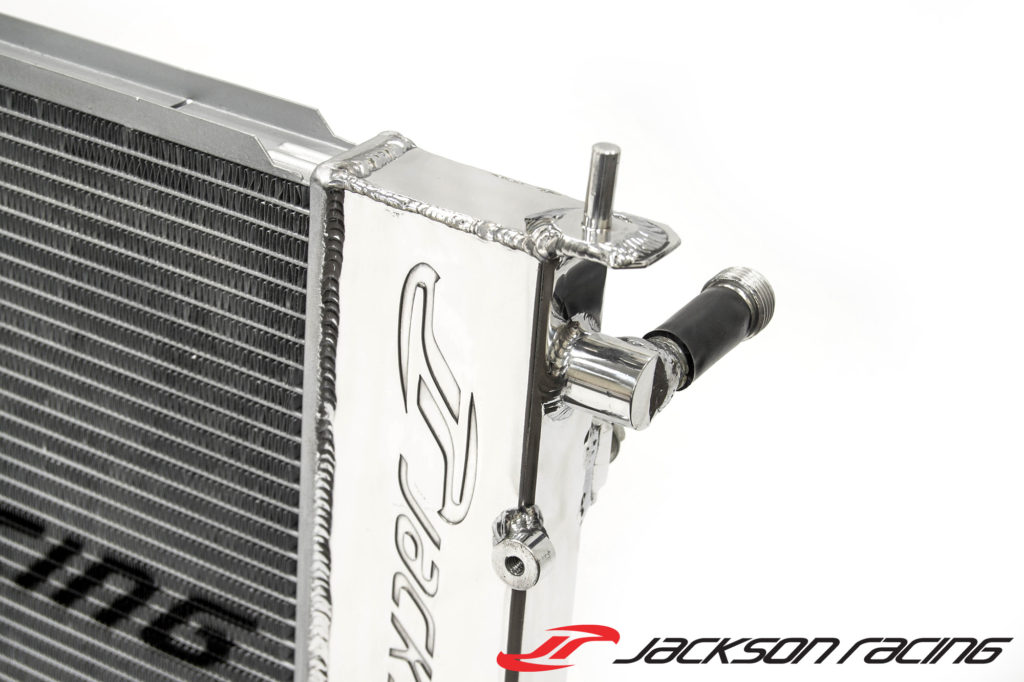 2012 was again a very busy year of racing for the “Jackson’s”. Racing has always been and always will be a part of the DNA here at Jackson Racing. Whether it’s Oscar Sr., Oscar Jr., Landon, or Spencer; one of us or a combination of us are racing to perfect our product and certify that “we race what we sell”.

Oscar Jr. seems to adapt to new tracks pretty quickly and it showed at the July 13-16, 2012 race at PIR by setting a time quick enough for Pole Position in the Super Touring Lites (STL) class and finished the weekend with wins on both days of the Double National event.

Three short weeks later Oscar Jr. was on his way to the lovely Miller Motorsports Park for another SCCA Double National event. Miller Motorsports Park is a World Class facility with excellent garages and a very challenging racecourse layout. When you add the 100ºF temperatures common in August to the challenging layout and 40 other screaming cars all vying for the same piece of tarmac going into the first turn the outcome doesn’t always turn out good. Fortunately for Oscar Jr. he easily navigated his way to the front, and scored two wins and two new track records over the weekend in the tough summer heat. Combined with his double wins at the Portland round, Oscar Jr. was awarded the SCCA Divisional Championship for 2012.

Unfortunately the SCCA decided to demote the fresh STL class to an “Exhibition Class” for 2012 just weeks before the Runoffs, which would make it a Non-National Championship race. We decided it was not a wise decision to make the trek back to Elkhart Lake, Wisconsin to compete in a class that didn’t award the National Championship. Oscar Jr. had a good, if very quick, year of SCCA Racing and came away with the Divisional Championship. Maybe this year he can go all the way and win the big one!

SuperStreet Magazine FF Battle 2012
Each year SuperStreet Magazine invites some of the best tuners of front drive Honda’s to compete in their FF Battle Championship. This year Oscar Jr. was hired by Sportcar Motion to drive their Honda CR-Z with a K20 engine swap. Sportcar Motion did an extremely gorgeous engine swap on the car and it looked like Oscar Jr., the 2011 FF Battle Champion, had a chance to repeat as champion in 2012. Unfortunately some wiring issues kept turning on the VSC (Vehicle Stability Control) in mid-corner and kept the little CRZ from it’s full potential.

AMA Endurocross Series
Like his father, Oscar Jr. is a very good motorcycle racer as well as a great car racer and will jump at any opportunity to race a motorcycle or a car. Enter the new sport of Endurocross and Oscar Jr. was hooked. Endurocross is a motorcycle race held inside sports arenas with huge obstacles like logs, boulders, sand and water crossings. Riders compete on motocross bikes that have been highly modified to be able to conquer these extreme obstacles. Oscar Jr. had a great season learning this new sport on a new machine and is looking forward to competing again in 2013.

Bonneville Salt Flats Land Speed Racing
The third week of August every year is the date for the worlds fastest cars and motorcycles to test their engineering against the laws of physics at the great Bonneville Salt Flats in Wendover, Utah. Jackson Racing was again teamed up with Hondata in an attempt to capture even more World Records just as they have since 2008. But this year things were different. Doug Macmillan of Hondata decided it was time that Oscar Sr. see what two Jackson Racing/Rotrex superchargers on a K20 engine and 800whp felt like at 200+mph. So this year Oscar Sr. climbed into a borrowed Bonneville legal driving suit and went out and drove to 198mph to receive his unlimited Bonneville racing license. The Hondata/Jackson Racing Acura RSX already holds numerous speed records and has gone through the speed traps at over 236mph, but for licensing purposes Oscar Sr. wasn’t allowed to go over 200mph during his license runs. And although any speed over 175mph but less than 200mph would have qualified him for his unlimited license, the racer in him pushed the envelope to reach a speed of 198.84mph! Oscar Sr. proved there is still a lot of Racer left in him and he still wants to race what he sells even if it means driving at 200+ mph!

The NASA 25 Hours of Thunderhill Endurance Race
The 25 Hours of Thunderhill is the longest race in North America, and is now legendary in road racing ranks as among the toughest, most challenging endurance races in the world. It is the greatest challenge to man and machine that you can imagine. Drivers are pushed hard for up to 5 hours at a time; the crew deals with a lack of sleep as they have to be ready for a pit stop at any moment during the entire 25 hours of racing and the Crew Chief has to endure the entire race with no rest whatsoever. In 2011 Oscar Jr. drove and Oscar Sr. was Crew Chief to the rookie team from 949 Racing and brought them a commanding win in their first attempt.

For 2012 Oscar Jr. and Oscar Sr. teamed up with AIM Tires to campaign a brand new “kit car” called the Catfish under the new Team CRE/Jackson Racing/Achilles Tire banner. The Catfish is a tube frame racing chassis with a flowing fiberglass body powered by a stock 1999 Mazda Miata engine, transmission and differential. Although the car only had 140whp it was very light, nimble, went hours on a single tank of fuel. The new Achilles racing tires that were being used for the first time proved unstoppable and provided excellent grip deep into a long driving stint. Because this is a purpose built car and not a production car it was required to run in the Unlimited ESR class against ultra-fast Radicals, LeMan type cars like the Norma, and other exotic racecars. When the checkered flag finally fell, the Team CRE/Jackson Racing/Achilles Tire Catfish CB01-R had finished a very respectable 3rd place in its first outing. For 2013 Team CRE/Jackson Racing/Achilles Tire will be racing the entire WERC Championship and the 2013 25 Hours of Thunderhill. We look forward to another dominant season as we smooth out the rough edges of this great new car and vie for the WERC Championship and a win in the prestigious 25 Hours of Thunderhill.