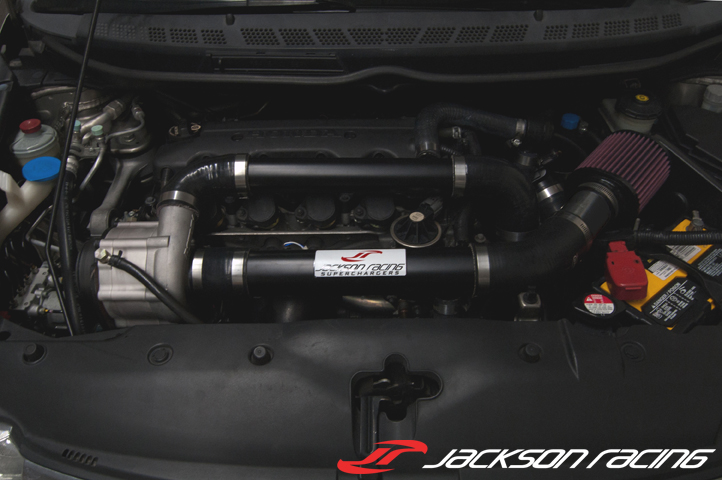 Jackson Racing releases their new supercharger system for
2006-2011 US 1.8L Honda Civic MT and AT

The Jackson Racing Civic R18 supercharger system has been extensively tested in all weather conditions to ensure factory drivability, excellent fuel economy, and proper emissions are retained while giving a substantial boost in performance. And just like our CARB-Legal CR-Z system, the Civic R18 system meets CARB emissions standards!

“After engineering and emissions certifying the CR-Z supercharger system, the 2006-2011 Civic R18 was the next step for Jackson Racing in our quest to produce powerful, fuel efficient, emissions legal supercharger systems,” said Oscar Jackson Sr., President and Chief Engineer of Jackson Racing. “There are plenty of companies that release products with little to no testing done on them and with no emissions compliance. That’s not our style. When you buy from Jackson Racing you get over 30 years of experience in building high quality performance products and Championship winning engineering.” 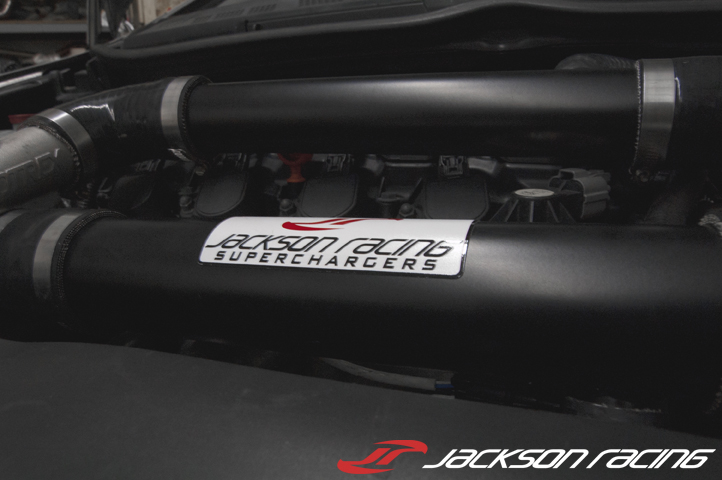 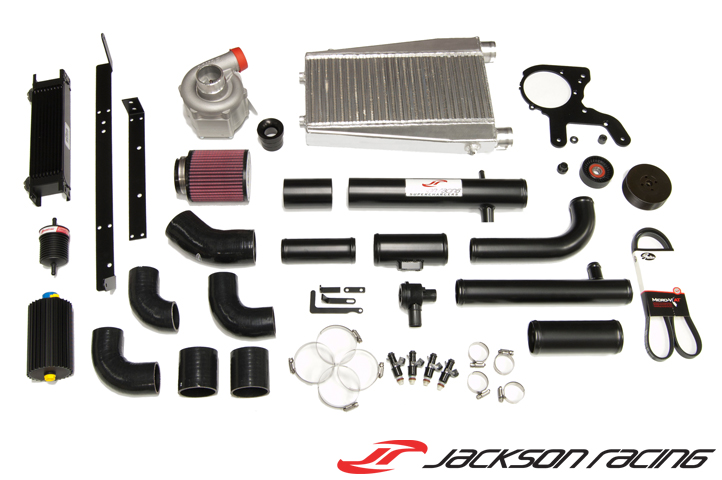 The TIY kit is ideal if you already have engine management and want to do your own tuning. This system ships at 10psi, like the Track Package.

The Factory Tuned system is our plug-n-play system. This system provides the same power and drivability as the Tuner kit without the added expense of the FlashPro tuning solution or hassle of flashing the ECU on your own. Install and enjoy.

The FlashPro Tuner system includes the Hondata FlashPro and the Jackson Racing R18 calibration. This system is ideal if you are looking for the data-rich features of FlashPro, and to learn more about your Civic R18’s ECU operation.

The Track Package includes new JR Track Pack calibration and 450cc injectors for 10psi of boost. This is the ultimate plug-n-play high performance setup for the R18.

Q: Will I need a clutch upgrade?
A: The Jackson Racing Civic R18 has done over 20,000 miles using the stock clutch. If you have an aggressive style of driving we would recommend a clutch upgrade.

Q: Will performance upgrades be available for the Jackson Racing Civic R18 systems?
A: Yes, our Track Pack will be available upon release and makes 100 HP over stock.

Q: Will you offer a kit for Asian and European owners?
A: International compatibility will be evaluated. We hope to offer an international Civic R18 option for international customers in the future.

Q: Will my Civic R18 pass emissions?
A: Our Civic R18 supercharger system has been granted a California Air Resources Board Executive Order (CARB EO# D-700-1) and is legal for use in pollution controlled automobiles in the state of California. This covers the Factory Tuned and FlashPro Tuner systems ONLY.

Q: Can I get a CARB-Legal system if I already have a FlashPro?
A: Yes! You can purchase the TIY system and the CARB Upgrade Package to make a CARB system with your own FlashPro. 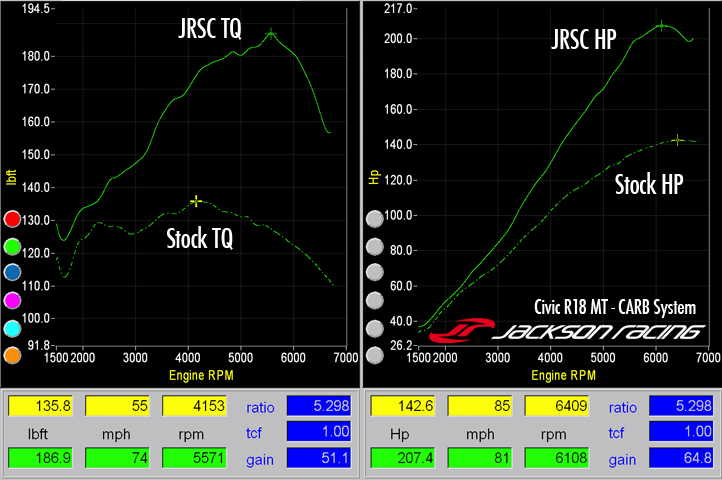 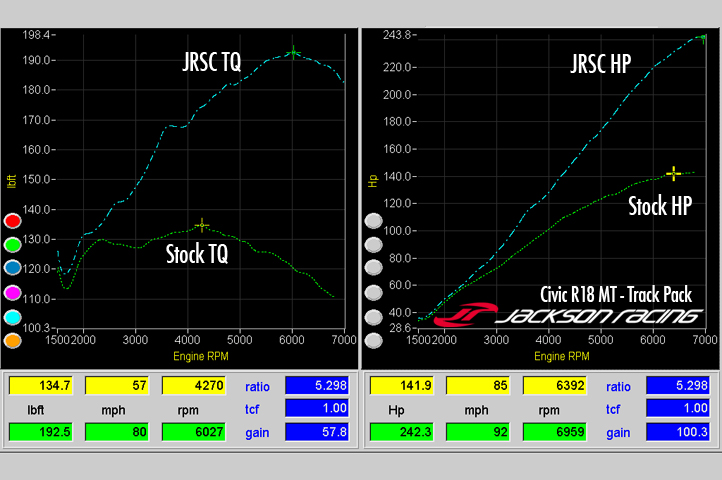 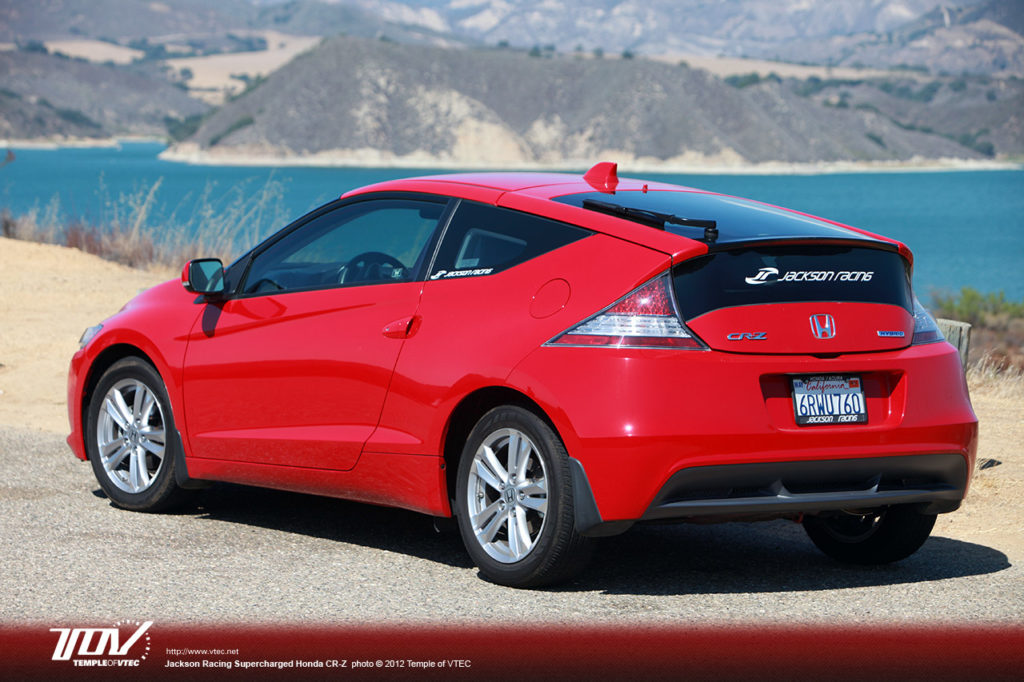 Shawn Church at Temple of VTEC got behind the wheel of our Jackson Racing CR-Z after the supercharger system release back in August. After a long weekend with the CR-Z, what was his opinion?

“So what is it like to drive a supercharged CR-Z for a week? Well, I put about 500 miles on Jackson Racing’s development car. I traversed Los Angeles rush hour traffic. Hit the highways for 2 hours of straight line cruising, blasted the back roads and the canyons and commuted back and forth to work on city streets…

…First, let’s cover the tuning of this kit. One of the biggest issues with aftermarket forced induction is that you’re usually depending upon someone of questionable skill to recalibrate the factory ECU to handle boost. And that’s if you’re lucky. Some kits come with piggyback computers that trick the factory ECU. In either case, usually something suffers and poor calibration tends to show up in the worst situations – like stop and go traffic, or trying to start from a stop going uphill, or during extreme hot or cold start scenarios. At some point, you’re going to be reminded that the factory engineers put one to two orders of magnitude more time into their calibration work than whoever sold you the kit did into theirs. Unless its the Jackson Racing CR-Z kit. As a tuner, I’m particularly sensitive to tuning issues and I was, of course, on the lookout for anything on the CR-Z. Worst case scenario would be that I could give Doug MacMillan at Hondata a gentle ribbing if I found something. Except that I didn’t. Really. Absolutely nothing. All that time spent getting this car to pass EPA and CARB testing means that it drives just like OEM, but with more power. Might there be more power if you don’t have to pass those tests? Probably, but in reality, for most owners, this is a set it and forget it kit. My hat goes off to these guys for a fantastic job…

…In the canyons, the JR CR-Z powertrain continues to shine. Smooth predictable power means that you can modulate power to limit wheelspin from the inside tire (no LSD) when powering out of corners. Heel-toe downshifting was intuitive and simple (again, no throttle lag and Honda doesn’t interfere with brake/throttle overlap – yet). The Rotrex blower makes its presence known audibly, but it speaks quietly instead of screaming in your ear. And when the canyons turned into city traffic, the JR kit was nearly transparent, except for the light breathy sound of the supercharger’s recirculation valve when lifting off the throttle at low speeds. Oh and the occasional chirp of the front tires as boost builds in first gear when you give it full throttle to execute a pass. In fact, the factory tires, with 25k miles and a couple of track days, were probably the biggest impediment to speed with the JR kit. From a low speed roll, mashing the throttle in first gear would result in copious wheelspin starting at around 4500 rpm if you didn’t modulate the throttle. With fresher (or simply _better_ ) tires, acceleration at low speeds would be dramatically improved. And speaking of acceleration, with 250 lbs of driver and gear, our best acceleration time to 60 mph as recorded by our Racelogic Driftbox was 6.9 seconds starting with a full 8 bars of charge. Our average time was around 7.2 seconds with 6 or 7 bars. With a better driver (I’m definitely not the fastest drag racer at TOV) and better tires, I think consistent 6.5 second 0-60 times are quite reachable. And while we didn’t have space to run a full 1/4 mile, I would predict a 14.9-15.2 second elapsed time with a 92-94 mph trap speed.

By now, some of you are probably muttering to yourself, “What about fuel economy?” since this is a fuel sipping hybrid with a touch of sport. Well, I think you’ll be impressed. Despite a heavy foot and extensive canyon running, our average over 500 miles was 34 mpg. Excluding the canyon runs, our 60% highway/40% city average was just over 37 mpg. And keep in mind I’m no hyper miler. I set the cruise control at 75+ mph on the highway when I could, I drove the car in sport 90% of the time, and I like to mash the gas around the city. I think that 40 mpg will be easily achievable for most people on the highway which basically means that you’re not really giving up any fuel economy if you don’t want to (IOW – restrain your right foot). In fact, even under our most brutal abuse in the canyons, we were hard pressed to go under 25 mpg. Of course, you are required to use 91 octane with the JR kit, but if you’re looking for the extra power, that’s a small price to pay in my opinion.”

Yorba Linda, California (December 1, 2012) – World-leading Supercharger experts Jackson Racing are proud to announce their next generation supercharger system for the Honda CR-Z has been granted a California Air Resources Board Executive Order and is legal for use in pollution controlled automobiles in the state of California.

“We’ve worked very hard this past year to develop an bolt-on supercharger system for what is one of the world’s cleanest PZEV vehicles. Our supercharger system includes Hondata ECU calibration and larger fuel injectors, and we are able to pass the strict AT-PZEV emissions standard. It was a challenge, but it is great to have a mean and clean package. This is the future of performance tuning!” says Oscar Jackson Sr., President and Chief Engineer of Jackson Racing.

The power and torque delivery of the Jackson Racing CR-Z is perfectly balanced with the Honda IMA hybrid system to provide a smooth, strong and sporty power delivery that will make you fall in love with your Honda again. The supercharger kit delivers an additional 50 horsepower and 45 ft-lbs of torque, an impressive 40% increase HP and 38% increase in torque. All while maintaining the excellent fuel economy expected from the CR-Z Sport Hybrid.

The Jackson Racing CR-Z supercharger system has been through extensive durability testing to ensure factory drivability is retained, while giving a substantial boost in performance. This testing includes track time by seasoned drivers, taking the car and supercharger system to the limit. The Jackson Racing CR-Z attended Super Lap Battle 2011, and on its first try broke the current Hybrid record by almost 6 seconds.

“We realize that performance tuning for the next generation of Hondas requires maintaining excellent fuel economy and adapting to new technologies,” said Oscar Jackson Sr., President and Chief Engineer of Jackson Racing. “The Jackson Racing CR-Z supercharger system embodies the best of our 30+ years of experience in building quality performance upgrades for Honda and Acura automobiles.”

The TIY kit is ideal if you already have engine management and want to do your own tuning.

The Factory Tuned system is our plug-n-play system. This system provides the same power and drivability as the Tuner kit without the added expense of the FlashPro tuning solution or hassle of flashing the ECU yourself. Install and enjoy.

The FlashPro Tuner system includes the Hondata FlashPro and the Jackson Racing CR-Z calibration. This system is ideal if you are looking for the data-rich features of FlashPro, and to learn more about your CR-Z.

FAQ:
Q: Will my 6-speed manual need a clutch upgrade?
A: The Jackson Racing CR-Z has done over 30,000 miles including several track days all using the stock clutch. If you have an aggressive style of driving we would recommend a clutch upgrade.

Q: Is the kit available outside the USA?
A: Yes, the FlashPro Tuner system is available for international customers. Visit FlashPro CR-Z to view the supported ECUs.

Q: Will I be able to adjust and custom tune my calibration?
A: The calibration provided by Jackson Racing with the FlashPro cannot be modified. 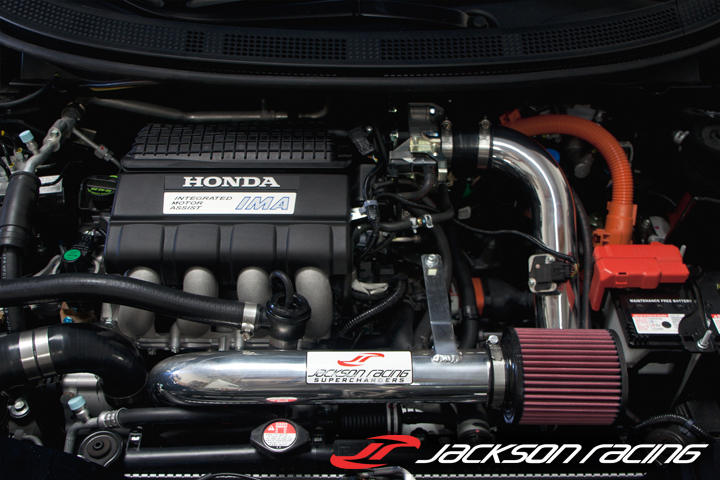 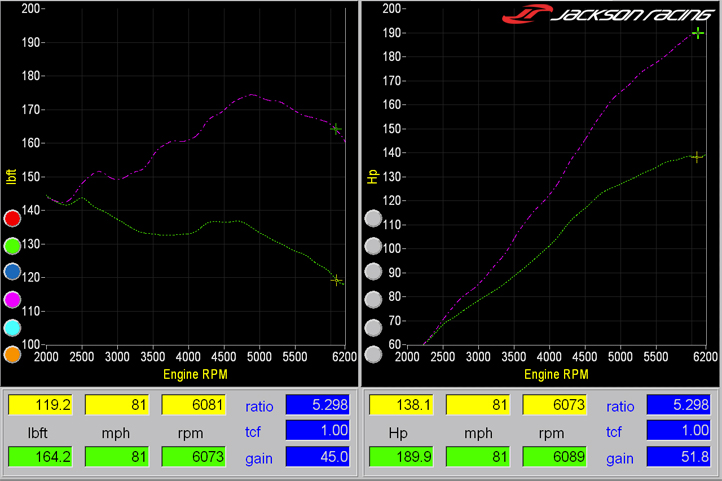 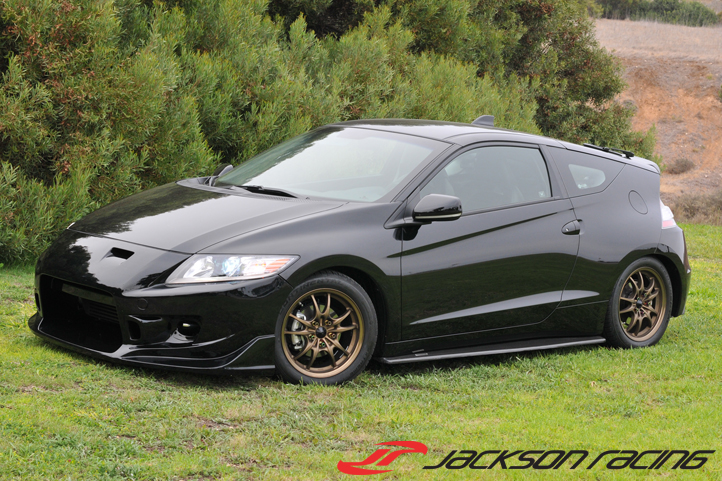